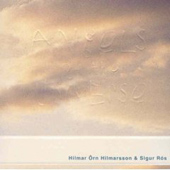 in january 2000, sigur rós headed to the studio to record two cover songs to be featured on their ný batterí release. when they finished them, they were contacted by the producers of an icelandic film called englar alheimsins and asked to contribute two songs to the film. having just completed two songs, this seemed like more than a coincidence ("it was as if it was controlled from above" kjartan has said) so they immediately handed these two songs to the producers. as mentioned before, these two songs, bíum bíum bambaló and dánarfregnir og jarðarfarir (death announcements and funerals) are covers of songs that have lived deep in the consciousness of icelanders for many generations.

bíum bíum bambaló is an old icelandic lullaby that has travelled for generations through word of mouth. this is the first time that it is recorded. dánarfregnir og jarðarfarir is sigur rós' rockish version of an organ theme that has been played for decades on the icelandic radio station when deaths and funeral arrangements are announced. this song has been labelled post-rock by brits, but jónsi calls it theme music, as everyone in iceland recognises this theme.

dánarfregnir og jarðarfarir jumped straight to #1 on icelandic charts. the film englar alheimsins (angels of the universe) was also massively successful and has been hailed almost unanimously by critics as the best icelandic film ever made. it's directed by the academy award nominated director friðrik þór friðriksson and is about a man who is losing his mind. dánarfregnir og jarðarfarir is played near the end of the film in a scene in which this man is frustrated. bíum bíum bambaló plays during the end credits. the film is scored by hilmar örn hilmarsson.